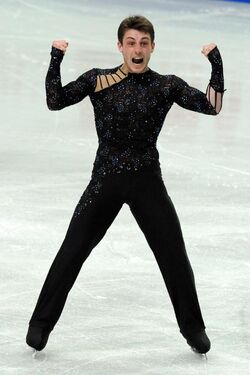 Joubert was born in Poitiers, France to Jean-Michel and Raymonde Joubert. He suffered a life-threatening illness at the age of 11 months, which led to the removal of one kidney.[5] Because of this illness, Joubert chose figure skating over more violent sports that he favored. He began skating at the age of four with his two older sisters. The siblings started out with Ice dancing, but Joubert became fascinated with the jumping aspect of singles skating and switched disciplines. [6]

Joubert has been considered somewhat of a heartthrob in his native country, France. This reputation has been contributed to by Joubert's short relationship with former Miss France, Lætitia Bléger.[6] He later brought a lawsuit against Bléger for 40,000 Euros for insinuating that he was homosexual and that their relationship was arranged to hide this.[7] Bléger and two magazines that published her allegations were ordered by a French court to pay a total of 17,000 Euros, and to publish the court ruling in one of the two magazines. [8][9]

Joubert is a sponsor for an association for children with Williams syndrome.[5] In March 13, 2006, Joubert published his biography, Brian Joubert: le Feu sur la Glace (Brian Joubert: the fire on ice), in French.[10]

Joubert's first major international competition was the 2000 World Junior Figure Skating Championships, where he placed 15th. He failed to qualify for the French team for Junior Worlds for the next year: because of this, the then-president of the French Ice Sports Federation, Didier Gailhaguet, entered Joubert in the 2001 Top Jump competition, where he placed second.[11] The 2000-2001 season was the only season Joubert spent on the international junior circuit.

Joubert made his international senior debut at the 2001 Skate America, where he placed 9th. At French Nationals, he won the bronze medal, qualifying him for the 2002 European Figure Skating Championships. He won the bronze medal, which earned him a spot on the French team to the 2002 Olympics, where he placed 14th. He rose one spot to 13th at the World Championships the following month.

Joubert burst onto the international scene in the 2002-2003 season. Following the withdrawal of Alexei Yagudin from the 2002 Skate America competition due to a hip injury, Joubert rose to the occasion and won the competition. He qualified for the Grand Prix Final with a fifth place finish at home at the Trophee Lalique, and then won the bronze medal at his debut in the Grand Prix Final. He also won the French national championships that season, the first of six titles. He won silver at Europeans and placed 6th at Worlds.

In the 2003-2004 season, Joubert once again won a medal on the Grand Prix circuit. At Europeans, he became the first Frenchman to become European Champion in 40 years and the first non-Russian to win the event since 1996. He won his first World medal later that year, a silver.

The 2004-2005 season started well for Joubert; he won two Grand Prix medals and placed a close second at Europeans. However, he had a disappointing Worlds, finishing 6th. Joubert fought back in 2005-2006, but it was an up-and-down season. He skated to a third-place finish at Europeans, and though he was expected to make a run at the podium at the 2006 Olympics, Joubert placed a disappointing 6th. He rallied at the 2006 Worlds, winning the short program but losing the title overall to Stéphane Lambiel.

For the 2006-2007 Grand Prix season, Joubert was assigned to compete in Trophée Eric Bompard and Cup of Russia, and placed first in both events. He went on to win the ISU Grand Prix Final in Saint Petersburg. Joubert reclaimed his European title at the 2007 European champion. He went on to Worlds and won his first World title.

Joubert began the 2007-2008 season at Skate Canada, which he won. He was forced to withdraw from Trophee Eric Bompard, his second Grand Prix event, before the event began, due to illness.[12] In the European championships in January 2008, Joubert fell on the triple axel in the short program and made mistakes in the long program, but still managed to earn his seventh European medal in as many appearances, a bronze. In March 2008, he competed at the World Championships, where he won the silver medal behind Canadian Jeffrey Buttle.[13]

Joubert's assigned events for the 2008-9 Grand Prix were Trophée Eric Bompard and the Cup of Russia.[14] After a 4th-place finish at 2008 Trophée Eric Bompard, Joubert won the 2008 Cup of Russia and qualified for the 2008-9 Grand Prix Final. He withdrew from the Grand Prix Final before the long program due to a back injury.[15] He also withdrew from the 2008-9 French National Championships prior to the event.[16] At the 2009 Europeans, Joubert scored a new personal best to take the lead after the short program, and finished second in the long program, with enough points to win his third European title.

Joubert is known for his strong jumping ability. He has a consistent quadruple salchow and a quadruple toe loop. At the 2006 Cup of Russia competition, Joubert joined an elite group of men's skaters by landing three quadruple jumps--two toe loops and a salchow--in his long program.[17] [18] Joubert has stated in interviews that he considers quad jumps to be important for the future of figure skating as a sport.[19].

Joubert has been criticized for the lack of variety in his spins, but this area has shown a marked improvement after Joubert's work with Swiss skater Lucinda Ruh starting in the 2005-2006 season.

Joubert trained for 15 years with Veronique Guyon because of his desire to remain close to his family in Poitiers. Guyon resigned from her position in the summer of 2003 due to her desire to spend more time with her family. Joubert then started training for the 2003-04 season with Laurent Depouilly, and took on Alexei Yagudin as his 'advisor'.[19] Joubert parted ways with Yagudin because of Yagudin's dislike of Nikolai Morozov, Joubert's choreographer at the time. [6]

Citing a lack of support from his coach, Joubert fired Depouilly and returned to Guyon for a brief period of time. However, Guyon's demands that Joubert stop working with his mother and that she should get paid by receiving 10% of his prize money from the 2005-06 season caused their relationship to further deteriorate, and they parted ways.[5] Joubert switched to Andrei Berenzitsev, and in September 2006 to Jean-Christophe Simond. Following Joubert's disappointing third-place finish at the 2009 Worlds, Simond and Joubert ended their work together.[20]

Joubert has been criticized over his association with Didier Gailhaguet, the former and since reinstated head of the French figure skating federation. However, Joubert credits Gailhaguet as having helped his career enormously.[19]

Retrieved from "https://figureskating.fandom.com/wiki/Brian_Joubert?oldid=10967"
Community content is available under CC-BY-SA unless otherwise noted.