Chen Lu in Stars on Ice 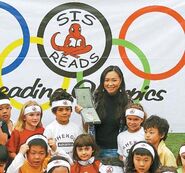 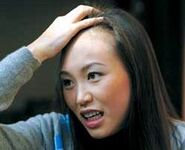 Chen was born in Changchun, China in 1976 as the daughter of an Ice hockey coach and a table tennis player. She was one of the most decorated figure skaters of the 1990s winning two Olympic medals, four World medals, and nine national titles. Her success brought attention to Chinese figure skating and spurred more Chinese success.

As a young skater in the early 90's, Chen demonstrated both athletic and artistic potential. In fact, she often out-jumped many of her contemporaries and the World's top figure skaters, including Kristi Yamaguchi, Midori Ito, Tonya Harding, Surya Bonaly, and Nancy Kerrigan. For example, she landed seven triple jumps, including a triple toeloop/triple toeloop combination at the 1991 World Championships held in Munich, Germany. During the free skating portion of the event, she landed more triple jumps than the top 5 finishers. This generated excitement about her prospects at a time when triple 1994 were beginning to dominate women's figure skating, while Chen's artistic talents were praised by such American commentators as Scott Hamilton and Sandra Bezic.

Chen produced strong results during the 1991-1992 Olympic season. In the fall of 1991, she became the first Chinese figure skater to compete in the United States when she finished 4th at the Skate America competition held in Oakland, California. This event also included Kristi Yamaguchi and Tonya Harding, the world's top two skaters at the time.

After winning the bronze medal at the 1992 World Junior Figure Skating Championships, she shocked the skating world with a 6th place finish at the Olympics. Chen was one of only a few skaters who attempted a triple Lutz combination in the technical program. (Although she landed the difficult combination, she had problems executing other required elements and was ranked 11th after the opening phase of the competition). In the longer free skate, she landed six triple jumps, again more than any of the skaters that finished ahead of her. Also, Chen's performance was remarkable in that she was the only top 6 skater that did not fall on a jump.

Her success at the Olympics established her as medal contender. Subsequently, she won bronze medals at the 92 and 93 World Championships, the first two won by a Chinese figure skater. In 1994, she became the first Chinese figure skater to medal at the Olympic games, winning the bronze medal for a performance that included five triple jumps skated to the soundtrack from Nausicaä of the Valley of the Wind by Joe Hisaishi. These successes were somewhat overshadowed by the Kerrigan/Harding controversy surrounding the Olympics and by the meteoric rise of another young skater, Oksana Baiul.

After the 1994 Olympics, Nancy Kerrigan and Oksana Baiul (the Olympic silver and gold medalists, respectively) retired from amateur competition and Chen became the favorite to win the World title in 94. However, a stress fracture injury kept her out of the competition and jeopardized her career. She made a successful comeback by winning the 1994 NHK Trophy in Japan.

Chen reached the pinnacle of her career in 1995 when she became the World Champion (another first for a Chinese skater) over Surya Bonaly of France and younger competitors from the U.S. (See the table below). Her program featured 5 triple jumps and was skated to the music from the motion picture, The Last Emperor. Sandra Bezic, a choreographer and television commentator, said that "With this program [Chen] says she wants to combine her Asian heritage with a sport that has been originated in the West." (Taken from NBC's broadcast of the event).

Chen struggled after her win at the World Championships. She had inconsistent results during the 1995-1996 season and, thereafter, never regained her top form. Further, she faced younger and more athletic competitors, such as American Michelle Kwan and Russian Irina Slutskaya.

Chen skated inconsistently during the 1995-1996 season. Although she finished 1st or 2nd at the three Champion's Series events she entered in the fall of 1995, she did struggle. For example, at the competition in France, she finished 7th in the technical program and 1st in the free skate. At the NHK Trophy in Japan, she struggled with her jumps during both phases of the event. The low point of her season came at the Champion's Series Final, where she led going into the free skate but dropped to 4th overall after struggling with her jumps in the free program. Kwan and Slutskaya finished 1st and 2nd, respectively, at the event. In contrast, she won the 1996 Winter Asian Games, a prestigious competition that occurs every four years before the World Championships. Therefore, some doubted that Chen could repeat as World Champion.

Nevertheless, at the 1996 World Championships, Chen skated very well--better than she had skated all season--but she finished 2nd overall to Michelle Kwan. Both skated well and both garnered two perfect marks of 6.0 for Presentation, but Kwan had the edge on the technical scores and won by a final tally of 6 judges to 3 (In other words, 6 judges placed Michelle Kwan ahead of Chen; three placed Chen ahead of Kwan). (See the three tables below). It remains a widely discussed result, but a possible explanation for Kwan's higher technical scores is that she landed 7 triple jumps to Chen's 6 and featured harder and more varied spins.

Chen posted the worst results of her career during the 1996-1997 season. She struggled with injuries and had conflicts with both her long-time coach and her skating federation. She withdrew from competitions in the fall of 1996, citing injury and was ill-prepared for the 1997 World Championships. There, she finished only 25th after the short program and did not qualify for the final free skate. Nor did her finish qualify China for the ladies' figure skating competition at the 1998 Olympic Games.

Thus, in the summer of 1997, Chen, working with a new coach named Liu Hongyun, had to qualify for the Olympics. She did this by winning an event in Vienna and by finishing 4th and 3rd at events in France and Japan, respectively. Still, she had not regained the form that had won her the World title and did not qualify for the Grand Prix Final (formerly known as the Champion's Series Final), which was an important pre-Olympic event. Further, there were many competitors that could potentially medal at the Olympics and there were significant doubts that Chen could repeat as a medalist.

At the 1998 Olympic Games, Chen announced her intention to retire from amateur skating after the Games. Thus her performances took on a special significance both as a comeback and as a farewell. She performed well to "Adios Nonino" in her technical program and to "Butterfly Lovers" in the free skate. Again, she incorporated elements of her Chinese culture into her routine.

Although she had struggled throughout, she was able to complete the two programs well enough to compete for a medal. Her main competitors were Russians Maria Butyrskaya and Irina Slutskaya. Like Chen, they skated well, but had mistakes. The final placements were very close and far from unanimous. Chen beat Irina Slutskaya by the tally of 6 judges to 3 and beat Maria Butyrskaya 5 judges to 4. Interestingly, most of the judges ranked Chen in 4th place, away from the medal. But because the 3rd place votes (called "ordinals") were split unevenly between Chen, Butyrskaya, and Slutskaya, Chen managed to win the bronze medal for the second time. (See the two tables below). Tara Lipinski and Michelle Kwan finished in 1st and 2nd place, respectively.

Afterwards, her performance was regarded as one of the great comebacks of the Olympic games and is memorable for the emotion she displayed during and after her free skate. Notably, Chen bowed to her coaches following her free skating performance, as she was leaving competition ice for the last time, in gratitude for their training.

She retired from amateur competition after the Olympics and turned professional. She toured with Stars on Ice for two seasons and competed at many professional and professional-amateur competitions. The Chinese Federation asked Chen to skate at the 9th Chinese National Games in 2001, so she could help younger skaters improve their elegance. She ended up winning. This national competition occurs every four years and is different from the Chinese National Figure Skating Championships that occurs every year.

After retirement she also wrote two books, Butterfly On Ice and The Illusions of a Butterfly. Both books were about her life as a figure skater and the struggles she had with her former coach Li Mingzhu. In the book, Chen mentions how Li started spreading rumors to the Chinese government that she was planning to defect to America, which were untrue. Li herself changed to US Citizenship after Chen won a second bronze medal at the Olympics.

In July 2005 she married Russian Denis Petrov, 1992 Winter Olympics Pair skating silver Olympic medals. On 28 June 2006, they welcomed a son, Nikita. Chen is now manager of the World Ice Arena Skating Academy based at World Ice Arena, an upscale mall rink in Shenzhen, China. Denis is also the head coach of the skating academy. Chen has also done choreography for Chinese competitive skaters. She continues to do television interviews in China but devotes most of her time to her family and work at the rink. Both Lulu and Denis are naturalized citizens of the United States due to their extensive professional engagements in America.

On 17 January 2006, Chen was one of torchbearers in the 2006 Winter Olympics relay, carrying the flame in Venice, Italy.

Retrieved from "https://figureskating.fandom.com/wiki/Chen_Lu?oldid=10050"
Community content is available under CC-BY-SA unless otherwise noted.