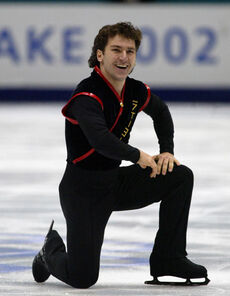 His parents named him after Elvis Presley because they were fans of the singer. Stojko has chosen Presley's music as accompaniment during exhibitions.

Stojko's parents immigrated to Canada in the '50s, his Slovenian father came on a boat in 1955 and his Hungarian-born mother, Irenee, escaped through the Russian Invasion in 1956. Elvis was born in Newmarket, Ontario and grew up in Richmond Hill, Ontario. He began skating at the age of 4 and won his first trophy when he was 6; as a child he also studied Karate, earning a Black belt (martial arts) when he was 16. He has sometimes incorporated martial arts moves into his skating. He also likes to ride dirt bikes.

Stojko has written a book about his career called "Heart and Soul" and he has been involved with Ronald McDonald Children's Charities in Canada.

At the 1991 World Championships, he became the first person to land a quadruple-double Figure skating combination. At the 1992 Winter Olympics in Albertville, he finished 6th despite skating a technically flawless routine, but a month later he made his first appearance on a major international podium when he placed 3rd at the 1992 World Figure Skating Championships behind winner Viktor Petrenko and Kurt Browning. In 1993 at the World Figure Skating Championships he finished 2nd, once again behind Kurt Browning.

It wasn't until the year 1994 that Elvis fully made his mark on the Figure skating world, starting with the Canadian National Championships in Edmonton, skating to the soundtrack Dragon A Bruce Lee Story, he defeated Kurt Browning in the free skate to win his first Canadian National Championship. At the 1994 Winter Olympics at the Hamar Olympic Amphitheatre, he skated well enough in the short program to place 2nd putting him in good position heading into the free skate when three of the pre-Olympic favourites (Brian Boitano, Viktor Petrenko & Kurt Browning) had disappointing short programs. In the free skate, despite popping out of a planned Triple-Axel combination, he skated flawlessly, but lower than expected Presentation marks including a 5.5 from the Russian judge meant Alexei Urmanov despite a stumble, won the Gold Medal. Many, after the Olympics felt Elvis was robbed of the Gold Medal in Lillehammer, however he put all that behind him and went to the 1994 World Championships in Chiba, Japan as the favourite and did not disappoint. Skating once again to Dragon The Bruce Lee Story, he won his first World Championship including landing a Quadruple jump in the free skate.

In 1995 he suffered a serious ankle injury during practice for the Canadian Championships but was determined to compete anyway. He began his short program but was not able to complete it due to the injury, and was awarded a Bye (sports) to the 1995 World Championships. His 1995 World Championship skate is regarded as one of his most impressive competitive outings because his injury had not fully healed, yet he was able to complete his full routine. Sitting in 2nd Place after the short program behind American Todd Eldredge, he won the free skate with the most memorable moment coming in the closing seconds of his routine when he landed a Triple-Lutz, Triple-Toe-Loop combination. He went on to win his 2nd World Championship at that event.

The 1996 World Championships in Edmonton, Alberta was a homecoming of sorts for Elvis, in front of the home crowd the entire nation was shocked when he fell on his Triple-Axel combination jump, leaving him in a disappointing 7th place after the short program. However in the free skate with nothing to lose and in front of a supporting crowd, he skated a superb routine including landing his patented Quadruple Combination jump (the only one in the competition) and climbed all the way back from 7th to 4th place just outside the podium, although impressive was disappointing for Elvis.

At the 1997 Grand Prix finals event in Hamilton, Ontario, he made history by being the first man ever to land a Quadruple-Triple combination in the free skate. Skating to the movie soundtrack of Dragon Heart, he won the Grand Prix finals an event highlighted by the fact that two other skaters also landed Quadruple jumps during the free skate (Ilia Kulik & Alexei Urmanov) but not in combination like Elvis did. At the World Championships later that year, he once again skated flawlessly during the short program but because of an early draw where he skated well before the other favourites, he ended up in 4th place after the short program. The free skate of the 1997 World Championships would be remembered for being one of the most dramatic nights in Men's figure skating history. Approximately halfway through the free skate, Alexei Urmanov the leader after the short program pulls out of the event citing injury, Ilia Kulik in 3rd place had a disastrous free skate putting him out of contention, then Elvis took to the ice, skating to Dragon Heart, he once again landed the Quadruple-Triple combination in a flawless routine earning him two perfect scores 6.0 and reclaiming his status as World Champion.

In the 1998 Winter Olympic games in Nagano, Japan, Elvis entered the competition as the heavy favourite and looking to be the first Canadian man to win an Olympic Gold Medal in figure skating, but it was not to be. He had suffered a Groin injury and he was also recovering from the flu that had struck many other athletes during the games. He was unable to take strong painkillers because they might have caused him to fail a drug test. The first sign that something was not right was during his free skate when his Quadruple-Triple jump combination was downgraded to just a Triple-Triple combination. He did not tell the media of his groin injury, and this only became obvious when he doubled over in pain after his long program. His silver medal in the 1998 Olympics was earned after a very difficult performance. He found it too painful to skate during the medal presentation ceremony and limped onto the podium wearing sneakers. He chose not to attend the World Championships that year because he did not want to make his groin injury worse. After the Olympics, though, he gave an interview about the performance and started to cry when he heard people call him "gutsy" and "full of courage".

He finished 4th in the 1999 World Championships and 2nd at the 2000 World Championships. At the Salt Lake Winter Olympics in 2002, he placed 8th. He turned professional in 2002, but briefly reinstated as an Olympic-eligible skater and publicly declared his intention to compete in the 2006 Olympics in Turin, Italy, before changing his mind and resuming his professional skating career.

He retired from skating on August 10th, 2006. His last performance was a gala performance for the Mariposa skating club, where he trained most of his amateur career.

Retrieved from "https://figureskating.fandom.com/wiki/Elvis_Stojko?oldid=9910"
Community content is available under CC-BY-SA unless otherwise noted.