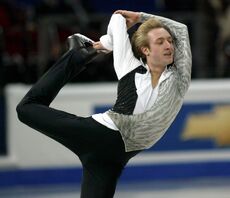 Evgeni Plushenko started skating at age four. When he was eleven years old, his ice rink in Volgograd closed. He was then sent to Saint Petersburg to train under the tutelage of Alexei Mishin.

Plushenko made quick progress on the international scene under Mishin's tutelage. As a 14-year-old, he won the 1997 World Junior Figure Skating Championships. The following year, at 15, he finished third at the senior World Figure Skating Championships. At the time, Mishin was also coaching another rising teenage star, Alexei Yagudin, who won the World Championships in 1998, and Yagudin and Plushenko developed a fierce rivalry. Yagudin finally decided to leave Mishin and eventually was coached by Tatiana Tarasova, but the rivalry between the two skaters continued throughout the years as they repeatedly battled it out for major titles.

At the 2002 Winter Olympics, Plushenko and Yagudin were considered co-favorites. Yagudin skated a flawless short program to a standing ovation and finished the night in 1st place. Plushenko, however, botched his quad-triple combination and finished 4th in the short program. He skated a strong free skate to "Carmen" and pulled up to finish in 2nd place overall; Yagudin received the highest free skate marks under the 6.0 system in the history of Olympic competition, and won the gold medal easily.

After Yagudin's retirement, Plushenko won most of competitions he entered in the following four years. He finished second only twice. The first time was to Emanuel Sandhu at the 2004 Grand Prix Final. The second was the 2004 European Champion, where he lost to Brian Joubert. He suffered through a difficult 2005, when was forced to withdraw from the 2005 World Figure Skating Championships in Moscow after the short program due to injury, and did not even compete at the Grand Prix Final. He eventually required groin surgery. He underwent groin surgery to correct the problem in Munich, Germany in spring 2005.

On June 18, 2005, Plushenko married Maria Ermak in a lavish ceremony at the Hotel Astoria in St. Petersburg. His wife studies sociology at the University of St. Petersburg. Their first child, a son named Egor Evgenievich (originally Kristian), was born on June 15, 2006. However, they separated not long afterwards and divorced in February 2008.

Going into the 2006 Winter Olympics in Turin, Italy, Plushenko was the overwhelming favorite because of his past success under the new ISU Judging System which was now in use. Plushenko skated two solid programs and became the Olympic champion. He finished the short program ten points ahead of his closest rival, setting a new ISU record for the short program. His free skate was just as strong, and also set a new ISU record. Plushenko's free skating music was especially arranged for him by violinist Edvin Marton.

Plushenko took a break from competitive skating following the 2006 Olympic season. He has said the off season has helped him rest and recover from past knee injuries he has battled.

After seeing the poor results of Russian skaters in the 2007 World Figure Skating Championships (which was the worst since 1960), Plushenko was worried about Russia losing its status as a dominant force in figure skating, and was also concerned that Russia might even lose spots for its skaters in the 2010 Winter Olympics. He announced in April 2007 that he has decided to return to competitive skating for the 2007-2008 season, to keep Russia at a competitive level with other countries until the next generation of Russian skaters can take over. Plushenko has since delayed his return indefinitely.

Plushenko has also stated that he plans to compete in the 2010 Vancouver Olympics.

At the age of 16, Plushenko was the youngest male skater to ever receive a perfect score of 6.0. He received a total of seventy five 6.0s before the new Code of Points judging system was introduced.

Retrieved from "https://figureskating.fandom.com/wiki/Evgeni_Plushenko?oldid=11547"
Community content is available under CC-BY-SA unless otherwise noted.