Fumie Suguri born in 1984 in Chiba, Japan is a Japanese figure skater. She is a five-time Japanese and three-time World Championship medalist, as well as the 2004 Grand Prix Final Champion.

During the Free Skate at Four Continents 2006

With Tanith Belbin, Sasha Cohen and Philippe Candeloro during the Champions on Ice Tour 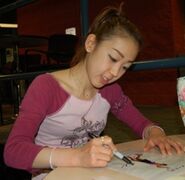 Suguri was born in Chiba, Japan. Her younger sister, Chika Suguri, is also a figure skater.

Her father was a pilot for JAL and Suguri lived in Anchorage, Alaska was a child. As a result, she is bilingual in Japanese and English.

She graduated from Waseda University.

She began skating at age 5 in Alaska. When she returned to Japan, she began training.

In 1994, Suguri visited the practice rink for the 1994 World Figure Skating Championships and learned the triple Lutz jump personally from Michelle Kwan, who was competing in those Worlds. Suguri won her first Japanese national title in 1997, and won it three more times between 2001-2003 and again in 2006.

In 2003, Suguri won the bronze medal again at the World Championships, this time behind Kwan and Elena Sokolova.

In 2004, she won the NHK Trophy, placed 3rd at Cup of China and qualified for the 2004 Grand Prix Final. Suguri won the Final over Sasha Cohen. Suguri is the first Japanese woman to win that competition.

In 2007, Suguri finished fourth at the Japanese championships behind younger competitors Yukari Nakano, Miki Ando and Mao Asada missing a spot to the World Championships in her home country. She competed at the Four Continents Championships, where she withdrew due to injury after falling on two jumps in her short program.

In 2008 at the Japanese National Championship, although Suguri placed third after her short program, she stumbled in the free program, finishing fourth overall, again missing a spot on the World Championship team.

She trained under Nobuo Sato, a ten-time Japanese national champion, for 19 years, until she moved her training ground to New Jersey to work with Nikolai Morozov. She was previously coached by Oleg Vasiliev for a brief time during the 2004-05 season, but he was fired by the Japanese federation after she struggled with her jumps and had poor results in her competitions.

Fumie Suguri has had a long competitive career. Her competitive highlights by season are split up into the tables below.

Retrieved from "https://figureskating.fandom.com/wiki/Fumie_Suguri?oldid=10974"
Community content is available under CC-BY-SA unless otherwise noted.