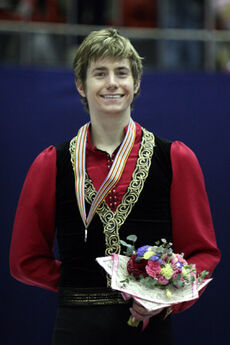 Jeffrey Buttle (born September 1, 1982) is a Canadian retired competitive figure skater. He is the 2006 Winter Olympics bronze medalist and the 2008 World Champion. On March 22, 2008, Buttle became the first Canadian man since Elvis Stojko in 1997 to win the World Title. He announced his retirement from competitive skating on September 10, 2008.

Jeffrey Buttle was born in Smooth Rock Falls, Ontario, and he began skating at age two and competing at age six. He also competed in Ice dancing with his older sister Meghan. During his career, he lived in Barrie, Ontario and trained at the Mariposa School of Skating.

He attended École élémentaire Marie-Curie, a French-language elementary school. While Buttle's family is not French-Canadian, Buttle attended French language schools as a child and is perfectly bilingual in English and French. He studied chemical engineering at the University of Toronto part-time before taking time off to focus on his skating.

Buttle won the silver medal on the junior level at the Canadian Figure Skating Championships in 1998. The next year, he placed in the top ten at his first senior nationals. He rose steadily through his ranks, gaining valuable experience on the junior level. He made his senior international debut in the 2001–2002 season, making his mark immediately by winning the silver medal at the NHK Trophy behind Takeshi Honda. At the Canadian Championships, Buttle made his first run on the podium and placed third. It earned him a trip to Korea for the 2002 Four Continents Figure Skating Championships, where he won his first gold medal.

Buttle's bronze medal finish at Nationals caused him to be named first alternate to the Canadian 2002 Olympic Figure Skating Team. However, silver medalist Emanuel Sandhu withdrew too late from the competition for Buttle to replace him, so Buttle did not compete. Instead, he went to the 2002 World Figure Skating Championships and placed high enough to earn Canada two spots to the next World Championships.

The next season, Buttle repeated his podium finish at Nationals, but was unable to defend his title at Four Continents. He worked to turn things around in the 2003–2004 season. He won his first gold medal on the Grand Prix of Figure Skating circuit and his second silver. Buttle qualified for the Grand Prix Final, but was forced to withdraw. After that setback, he had a disappointing Nationals and did not earn a spot to Worlds. Buttle was instead sent to the Four Continents Championships, which he won for the second time. Buttle decided he needed a change of scenery and spent that summer training in Lake Arrowhead with Rafael Arutunian, and Arutunian is still his secondary coach, after Lee Barkell.

Buttle recovered in the 2004–2005 season. He qualified for the Grand Prix Final a second time and won the silver medal. He went on to win his first National title. He finished the year with a silver medal at the 2005 World Figure Skating Championships.

In the 2005–2006 Olympics season, Buttle won the 2005 Trophée Eric Bompard and came in second at the 2005 Skate Canada International. With a gold and a silver medal, he qualified for the 2005–2006 Grand Prix Final and captured his second consecutive silver medal at that competition. He went on to win his second National title at the 2006 Canadian Figure Skating Championships and went into the Olympics as the reigning World silver medalist. While not a favorite to win, he was a favorite to medal.

At the Olympics, Buttle skated a flawed short program that left him in sixth place going into the free skate. Two days later, during the free skate, Buttle fell on his attempt at a quad toe jump and then put a hand down on the ice after a triple axel. After this inauspicious beginning, he pulled himself together to pull off a personal best and place second in the free skate, third overall, winning Canada's first bronze medal in men's figure skating since Toller Cranston in 1976. Buttle later said that he kept thinking of winning a medal in his short program but later focused on simply enjoying himself in the free skate program, and it paid off.

After the Olympics, Buttle went on to the 2006 World Figure Skating Championships, held in Calgary. He placed sixth.

Buttle withdrew from the 2006 Grand Prix series due to a stress fracture in his back. He began his season at the 2007 Canadian Figure Skating Championships, where he won his third consecutive national title. After Nationals, Buttle went on to the 2007 Four Continents Championships in Colorado. He was the leader after the short program, and became the first male under the Code of Points system to gain level fours on all spins and footwork. A disappointing free skate in which he only did a double axel without combination and a single on the second attempt left him with the silver medal, behind American Evan Lysacek.

Buttle then competed at the 2007 ISU World Figure Skating Championships. In his second international competition of the season, Buttle was second after the short program with a new personal best. He placed eighth in the free skate, dropping down to sixth place overall. His placement, combined with that of Christopher Mabee, earned Canada two spots to the 2008 World Championships.

For the 2007–2008 season, Buttle started off slow placing third and fourth at his two events. At Nationals, despite taking the lead after the short program, he ended up losing his title to a rising star Patrick Chan. At the 2008 Four Continents, after a third place finish in the short program, Buttle went on to place second in the long and consequently won the silver medal.

At the 2008 World Championships, Buttle surprised everyone by edging out the deep field to be in first place after the short program. He then went on to deliver his best ever performance to win the gold medal by a 13.95 point margin of victory over silver medalist Brian Joubert. Following his win at Worlds, Buttle appeared as a guest on many TV shows including CBC's Air Farce Live.

Buttle was initially assigned to the 2008 Skate Canada International and 2008 Cup of China for the 2008/2009 season. He announced his retirement from competitive skating on September 10, 2008, saying that his motivation to compete has ceased.

Retrieved from "https://figureskating.fandom.com/wiki/Jeffrey_Buttle?oldid=9826"
Community content is available under CC-BY-SA unless otherwise noted.