He is currently ranked 4th in the world. Weir placed 2nd after the short program of the 2006 Winter Olympics and finished 5th after the long program.

Unlike most figure skaters, he is a clockwise spinner and jumper. 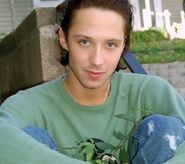 On his rivalry with Evan Lysacek:

Weir was born in Coatesville, Pennsylvania (sometimes referred to incorrectly as Lancaster County), to parents John and Patti Weir. He has a brother, Brian, who is four years his junior. His family moved to Newark, Delaware soon after Johnny began skating at the age of twelve to be near his training rink and coach. In the summer of 2007, he moved to Lyndhurst, New Jersey and began training in nearby Wayne, New Jersey.

Weir was an honor roll student at Newark High School and studied linguistics part-time at the University of Delaware before dropping out to concentrate on his skating. He is a self-proclaimed Russophile who admires the skating style and culture of Russia and taught himself to speak and read the language. He also speaks some French.

Weir owns two pet Chihuahuas named Bon-Bon and Vanya and is a collector of Russian Cheburashka memorabilia. He has an interest in fashion design and in addition to designing some of his own skating costumes, he has designed Ice dancing costumes for Melissa Gregory and Denis Petukhov and show costumes for Oksana Baiul.

Weir skated with the Champions on Ice touring ice show every spring from 2004 until 2007, their last season before going out of business. Off the ice, he has appeared in a fashion spread in BlackBook magazine, taught Kathy Griffin how to skate in the season two finale of Kathy Griffin: My Life on the D-List., and modeled in runway shows for the fashion label Heatherette.

Film documentary company Idea Factory is producing Johnny Weir: Black Swan Rising, a documentary series with six 30-minute episodes about Weir that has been scheduled for broadcast on the Sundance Channel in 2009.

In July 2008 Grand Prix Final, the United States Figure Skating Association and Skating Magazine announced Weir as the winner of the 2008 Reader's Choice Award for Skater of the Year, an annual trophy voted upon by skating fans and awarded to the American skater or skating team whose achievements were of the highest merit in the previous season.

When he was a boy, Weir was a successful competitor as an equestrian. He became interested in figure skating at the age of eleven while watching Oksana Baiul win her 1994 Olympic gold medal. He taught himself how to jump on roller skates in his basement. His parents eventually bought him a pair of used figure skates, and he practiced on a frozen cornfield behind his family home. His parents then purchased group lessons for him at the University of Delaware, where coach Priscilla Hill soon noticed his talent and took him on as a private student. This was the first time since 1987 that the U.S. had placed first and second on the World Junior podium. Weir also placed sixth that year at the senior U.S. Figure Skating Championships. Shortly after this competition, he switched club affiliation from the University of Delaware FSC to the Skating Club of New York, which he still represents.

The 2003-2004 season was the turning point for Weir. He qualified for the U.S. Figure Skating Championships by winning his regional and sectional championships. He received the first 6.0 of his career during his long program at 2004 U.S. Championships, winning the gold over Michael Weiss and Matthew Savoie. He then competed at the 2004 World Championships and placed fifth. but Weir also skated at the 2004 for no official points and took the silver medal behind reigning world champion Evgeni Plushenko. At the 2005 US Championships, he earned five 6.0's for presentation with his free skate to Otonal and successfully defended his national title. He went on to compete at the 2005 US Championships with a landing foot injury and placed fourth.

The 2005-2006 Olympic season proved difficult for Weir. He came in seventh at Skate Canada International after spraining his ankle on a jump landing at the start of the free skate and struggling through the rest of the program, and third at Cup of Russia. At the 2006 U.S. Figure Skating Championships, he won his third consecutive title and, as the national champion, was automatically named to the U.S. 2006 Winter Olympics and World teams.

At the 2006 Winter Olympics, Weir skated a personal best short program and was in second place behind Evgeni Plushenko in that segment. However, Weir omitted some of his planned jumps in the free skate, and finished off of the podium in fifth place. At the 2006 World Championships, Weir finished seventh, fighting a nagging back injury.

Weir began the 2006-2007 competitive season at Skate Canada International, where he placed third, then went on to Cup of Russia and won the silver medal, his third consecutive medal at that event.

Weir withdrew from the 2006 Grand Prix Final before the free skate due to a hip injury he sustained in a freak fall during the short program. At 2007, Weir was in second place after the short program, less than a point behind Evan Lysacek. In the free program, he was unable to complete his triple axel combination, fell on a triple loop and doubled several of his planned combinations. He attempted a quadruple toe loop but it was heavily two-footed on the landing. Weir lost his national title and finished in third place. At the 2007, Weir placed eighth. He subsequently had a great start to his 2007-2008 season at the Cup of China where he skated two clean and strong programs, achieving new personal best scores for both his free skate and overall score and winning the gold medal over fellow American Evan Lysacek. He then went on to Cup of Russia and took the gold medal there, as well.

At 2008 Grand Prix Final, Weir won the short program over Evan Lysacek by 1.35 points but Lysacek won the long program by exactly the same amount, resulting in a tie. Weir completed a slightly two-footed quadruple toe loop in his long program and scored more points on his jumps and in the program components than Lysacek but Lysacek scored more points for his spins and footwork. Under ISU rules, in the event of a tie the winner of the long program is awarded the gold medal,

Over the Christmas holiday in 2008, Weir traveled to South Korea to perform in a charity skating show that raised money for children's causes. While there, he contracted a severe stomach virus that landed him in the hospital and caused him to lose eight pounds in a single day. He was unable to regain all of the weight or train at full capacity before the 2009 U.S. Figure Skating Championships in January 2009, where he singled the planned triple axel in both his short and long programs and also fell on the triple lutz in the long, resulting in a fifth-place finish. It was the first time since 2003 that he had been off the podium at Nationals. He was subsequently not named to the US World Team.

From the beginning of his career at age twelve, Weir trained under coach Priscilla Hill. They worked together first at the University of Delaware in Newark and after the 2002/2003 season moved to the Pond Ice Arena, also in Newark. Weir also spent part of each summer between 2003 and 2005 US Championships working with Russian coach Tatiana Tarasova at the International Skating Center of Connecticut in Simsbury, Connecticut.

He changed coaches in the summer of 2007 when he moved to the Ice Vault Arena in Wayne, New Jersey and began working with Galina Zmievskaya, who previously coached Weir's idol Oksana Baiul . Zmievskaya's son-in-law Viktor Petrenko acts as Weir's assistant coach, and her daughter Nina Petrenko is one of his choreographers.[3]

Retrieved from "https://figureskating.fandom.com/wiki/Johnny_Weir?oldid=11497"
Community content is available under CC-BY-SA unless otherwise noted.