Miki Ando is a Japanese Figure skater. She is the 2007 World Figure Skating Champion, the 2004-2005 Japanese and the 2004 World Junior Champion. Ando was the first, and, as of 2008, the only female skater to successfully complete a quadruple jump in competition. Ando landed the first ladies' quadruple Salchow at the 2002 Junior Grand Prix Final. 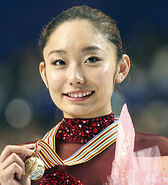 Aftermath of a bad fall 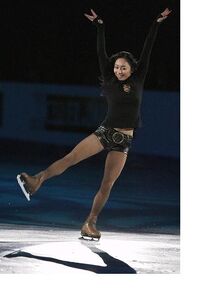 Ando was born in Nagoya, Japan in 1987. In 2006, she entered Chukyo University in her hometown.

She began skating in 1996 at the age of eight. She soon turned to Yuko Monna whose students included the Asada sisters at the time. From the 2000-2001 season she was coached by Nobuo Sato, and her program already started to feature 'triple lutz-triple loop'.

Ando made history next season at the 2002 Junior Grand Prix Final, where she became the first female skater to land a quadruple jump. She remains the only lady to ever perform this feat. That season she defended her national Junior crown, and won silver at the World Junior Championships.

Ando was prominent in 2003-2004, winning again the JGPF, becoming the national Junior Champion three times in a row, and winning the 2004 World Junior Figure Skating Championships. She also won the senior All Japan Championships and placed 4th at her first senior World Championships.

2004-2005 was her first and full senior season which resulted in two GP medals and 4th place at her first Grand Prix Final, defending her national senior crown, and 6th at the World Championships.

It looked as if Ando had started her 2005-2006 season well, with a silver at the Cup of Russia, in her first experience training outside of her country under her new coach Carol Heiss. However, she had to go through four major games within only a month that turned out as 4th at NHK, 4th at the GPF, and slipping to 6th at defending the All Japan Championships. She ended her season with her lowest scoring performance at the 2006 Olympics. She placed 15th after falling three times in her free skate including the fall on her quad attempt. Ando did not compete at the World Championships the following month.

Under her new cach Nikolai Morozov, Ando made a strong return in the 2006-2007 season winning Skate America and picking up the silver medal at Trophee Eric Bompard. It was therefore surprising that she placed 5th at the Grand Prix Final in Saint Petersburg; however, it was later revealed that Ando, along with the rest of the Japanese team, competed there while suffering from stomach flu. At the 2006 Japanese Nationals, though dislocating her shoulder while performing a spin in her free skate, she skated on to place second behind Mao Asada. At the 2007 World Figure Skating Champion, placing second in both the short program and the free skate, Ando scored a total of 195.09 points to win the World Championship by less than one point over her countrywoman, Mao Asada. She set new personal bests in both the short program and free skate and a new personal best total. For these efforts, she was named as one of Vogue Japan's Women of the Year in 2007, and received 6 other prizes including the most valuable mention from the Japan Olympic Committee.

The following season Ando suffered in many aspects. Though winning a silver at Skate America, she fell three times at NHK unabling her to go to the GPF. But she showed brilliance at the 2007 Japanese Nationals winning the free skate with a standing ovation, earning again 2nd place after Mao Asada. She then took bronze at the Four Continents Championships in which she attempted a quad Salchow that popped into a double. At the 2008 World Figure Skating Championships, Ando was 8th after the short program and withdrew during her free skate due to her leg muscle injury she had that morning.

In the 2008-2009 Grand Prix season, Ando placed third after Kim Yu-Na and Yukari Nakano at 2008 Skate America and placed 2nd behind Kim again at the 2008 Cup of China. At the Grand Prix Final, Ando landed a quadruple Salchow attempt in her free skate program for the first time in competition since 2004. Though the quadruple jump was downgraded, and despite her last place finish, Ando expressed that she was very happy with her performance, and that she would still continue to pursue landing her quad Salchow when possible. At the 2008 Japanese Nationals, she clashed with Suguri in the free skate warm-up and had damage to her knee, but managed to place 3rd with her splendid short program, earning one of three spots to represent Japan at the 2009 World Championships.

Retrieved from "https://figureskating.fandom.com/wiki/Miki_Ando?oldid=10162"
Community content is available under CC-BY-SA unless otherwise noted.