Norman M. Scott was a Canadian Figure skater who competed in both single skating and pair skating. His pairs partner was Jeanne Chevalier. As a single skater, he is the 1914 and 1920 Canadian champion. He and Chevalier won the 1914 Canadian pairs title. Scott was part of the four teams that won the silver medal in the Canadian fours championships in 1913.

He also competed in the United States and won the first United States Figure Skating Championships in both singles and pairs in 1914. 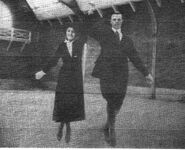 Norman Scott and partner Jeanne Chevalier.
Add a photo to this gallery

Retrieved from "https://figureskating.fandom.com/wiki/Norman_M._Scott?oldid=10992"
Community content is available under CC-BY-SA unless otherwise noted.