Oksana Baiul (born 16 November 1977) is a Ukrainian professional figure skater. She is the 1994 Olympic Champion. 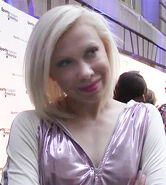 At the opening of the Sports Museum of America in 2006

Oksana at the 2006 Espy Awards

At NYC Fashion Week, Fall 2008
Add a photo to this gallery

Baiul was born in Dnipropetrovsk, Ukrainian SSR. She was raised solely by her mother, Marina, after her parents divorced when Oksana was two years old. Marina died of Ovarian cancer when Oksana was thirteen; Oksana had already lost her maternal grandparents and she had no other relatives to care for her. For a while, Baiul was looked after by her coach, but when he emigrated to Canada, she was left on her own and was soon sleeping on a cot at her hometown ice rink. She was eventually taken in by the top-ranked figure-skating coach in Odessa, Galina Zmievskaya, sharing a small bedroom in Zmievskaya's crowded three-room apartment with one of Zmievskaya's own daughters. Zmievskaya's pupil and son-in-law, Olympic figure-skating champion Viktor Petrenko, helped cover Baiul's expenses.

Baiul won the 1993 World Figure Skating Championship in her first senior competitive season at the age of 15. She then won the Gold medal at the 1994 Winter Olympics, defeating Nancy Kerrigan of the United States. Baiul nearly missed competing in the free skate altogether, having been injured after a collision with Tanja Szewczenko of Germany during a warm-up session following the ladies' short program. She received two Olympic-approved pain-killing injections of anesthetics in her lower back and shoulder which enabled her to perform and complete her free skate.

Despite their status as Olympic champions, Baiul and Viktor Petrenko faced the same difficulties back home in Odessa as their fellow Ukrainians, living in a financially-strapped country where even meat was a luxury and utility outages were a common occurrence. Conditions at their rink in Odessa had deteriorated severely due to the lack of financial support from the government for figure skating since the breakup of the Soviet Union. They had no working Zamboni, so coaches and skaters often had to scrape the ice clean with their hands. It was no surprise, then, that Baiul turned professional after the 1994 Winter Olympics, even though she was only 16 years old at the time and had competed in only four major international events (winning the two highest ranked — World Championships and the Olympics - and finishing second in the European Championships in 1993 and 1994). Her coach and surrogate mother, Zmievskaya, negotiated a very profitable contract for her to tour the United States following the Olympics, an opportunity she could only take advantage of as a professional.

Unfortunately, Baiul was soon plagued by physical ailments that affected her skating ability. She required Arthroscopic knee surgery in the summer of 1994, after which she was advised by her doctor not to return to the ice for two months. Due to the million-dollar touring contract signed by her coach/manager/surrogate mother, Zmievskaya, Baiul ignored doctor's wishes and was skating again in two weeks; she was performing again in six. This move, along with changes in her maturing body, drastically hindered her jumping ability.

Involvement with skating after retirementEdit

In 1994, Baiul and Petrenko were invited to train at the newly-built International Skating Center of Connecticut in the United States, and Zmievskaya was asked to lead the coaching staff there. The entire "family," including Petrenko's wife (and Zmievskaya's daughter), Nina, left Ukraine and moved to the United States to start a new life.. Since her retirement from amateur skating, Baiul has continued to skate professionally from time to time, including an engagement with the touring show "Broadway on Ice."

In December 2006, Bauil skated at the Red Square ice rink in Moscow alongside famous champions from Russia, China, France and other countries. In February 2007, she collaborated with renowned ballet dancer Saule Rachmedova to bring together Ice Theatre of New York and couture fashion for the debut of innovative fashion designer Levi Okunov's "Winter Collection." The following month, Baiul appeared on MTV's Total Request Live. She was there to promote the new ice skating film Blades of Glory (2007), starring Will Ferrell.

Baiul has a role in the skating stage musical Cold as Ice. The story surrounds six skaters from Canada, Russia and the United States preparing for their national championships and the Olympics while dealing with demanding coaches, stage mothers and other trials. It is scheduled to open in December 2008 in Brighton Beach, New York, before going on tour and opening on Broadway in 2009. It is produced and written by former skater Frank D'Agostino.

In January 1997, Baiul was arrested for driving under the influence of alcohol after crashing her car into a tree in Connecticut. The charges were eventually dropped after she met the terms of probation and completed an alcohol education program.

Baiul lived in Richmond, Virginia for several years in the late 1990s before moving to her current residence in Cliffside Park, New Jersey. She ended an engagement to her long-time boyfriend, clothing entrepreneur Gene Sunik, in 2005. She has her own line of clothing and jewelry. In November 2005, Baiul appeared on the Bravo (television network) television program Celebrity Poker Showdown. She was also part of the celebrity panel of judges (along with Steve Garvey and Jonny Moseley) on the ABC show Master of Champions, which aired briefly in 2006.

Although Baiul was raised as a Russia Christian, her maternal grandmother was Jewish. Partially for this reason, she supports the Tikva Children's Home Charity, which works to aid the Jewish children of Odessa, Ukraine. In addition, Baiul supports and is a member of the International Museum of Women, a world-class cultural and educational institution with the mission to celebrate the lives of women around the world.

Retrieved from "https://figureskating.fandom.com/wiki/Oksana_Baiul?oldid=11553"
Community content is available under CC-BY-SA unless otherwise noted.