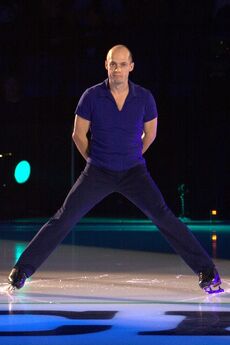 {{quote|When you are a competitor you push it to the limit, knowing that the people you are competing with are doing the same. That puts a lot of pressure on every move. Every jump takes split-second timing. If you are even the slightest bit off, a jumping error could destroy whatever chances you had for a decent result. [2]

Hamilton was adopted at the age of six weeks by Ernest S. Hamilton and Dorothy McIntosh of Bowling Green, Ohio. He has two siblings, older sister Susan and younger brother Steven (also adopted). He attended Kenwood Elementary School. When Scott was two years old he contracted a mysterious illness that caused him to stop growing. After numerous tests and several wrong diagnoses (including a diagnosis of cystic fibrosis that gave him just six months to live), the disease began to correct itself. His family physician sent him to Boston Children's hospital to see a Dr. Shwachman. Sources are unable to verify if he was actually diagnosed by Dr. Shwachman as having Shwachman-Diamond syndrome. It is said that a special diet and exercise cured the problem. However, he grew to only 5-foot-2½ and he weighed only 108 pounds during his peak skating years.

At age 13 he began training with Pierre Brunet, a former Olympic champion. In 1976, however, he was almost forced to quit skating because the cost of training was too high, and he enrolled in college. However, Helen and Frank McLoraine stepped in to provide financial support for Hamilton to continue his training.

In 1980, Hamilton finished third in the U.S. Figure Skating Championships, earning him a place on the U.S. Olympic team. He finished in fifth place at the 1980 Winter Olympics, where he also had the honor of carrying the American flag in the opening ceremony. His breakthrough performance was in the 1981 U.S. Championships. He performed flawlessly and the audience was at a standing ovation several seconds before the end of the performance. He never lost a competition again. In 1981 he won gold in the World Figure Skating Championships. He won gold again in 1982 and 1983 at the U.S. and World Championships, and won the gold medal at the 1984 Winter Olympics. He won that year's World Championships and then turned professional in April 1984.

After turning professional, Hamilton toured with Ice Capades for two years, and then created "Scott Hamilton's American Tour," which later was renamed Stars on Ice. He co-founded, co-produced and performed in Stars on Ice for fifteen years before retiring from the tour in 2001 (though he still returns for occasional guest performances).

He has been awarded numerous skating honors, including being the first solo male figure skater to be awarded the Jacques Farvat Award (in 1988). In 1990 he was inducted into the United States Olympic Hall of Fame.

Hamilton was a skating commentator for CBS television for many years, beginning in 1985. He has also worked for NBC television. In 2006 he was the host of the FOX television program "Skating with Celebrities." He currently serves on the Board of Directors for Special Olympics International.

Scott Hamilton was featured in The Fairly OddParents Olympic special as a host for the Fairy Olympics and voiced the dog dancing commentator on the King of the Hill episode "Dances with Dogs".

He appeared on the August 26, 2008 episode of Wanna Bet?, where he finished 2nd, losing to Bill Engvall. In 2009, he appeared in the second season of Celebrity Apprentice. In the second episode Scott acted as the project manager in charge of generating a comic-book style brand ambassador for Zappos.com. Scott ultimately sealed his own fate by naming the character "EEE" rather than capitilizing on the brand's existing association with the letter Z.

In 1990, as the Make-A-Wish Foundation honored its 10th birthday, Scott Hamilton was recognized as the Foundation's first ever "Celebrity Wish Granter of the Year."

In 1993, the Associated Press released results of a National Sports Study conducted by the Sports Marketing Group on the popularity of over 800 athletes. Hamilton ranked in the top eight most popular athletes in America, ranking far ahead of big-name sports stars such as Michael Jordan, Magic Johnson, Troy Aikman, and Dan Marino, Wayne Gretzky, Joe Montana, and Nolan Ryan.

In 1997 Hamilton had a much-publicized battle with testicular cancer. He made a return to skating after his treatment and his story was featured in magazines and on television.

On November 14 2002 he married Tracie Robinson, a nutritionist. The couple have two sons, Aidan McIntosh Hamilton (born September 13, 2003) and Maxx Hamilton (born January 21, 2008). The family resides in Nashville, Tennessee. They are members of the Church of Christ.

It was announced on November 12 2004 that Hamilton had a benign brain tumor, which was treated at the Cleveland Clinic.

In 2009, Hamilton wrote the book, The Great Eight, which shared the secrets to his happiness and how he overcame numerous challenges and disappointments throughout his life.

On June 23, 2010, Hamilton went into brain surgery to prevent the recurrence of the benign tumor discovered in 2004. Called craniopharyngioma, the tumor could have caused blindness if left untreated. On June 25, 2010 it was reported that Hamilton was resting comfortably in the hospital and was "Doing great" [4]

In November 2010 Scott was in the hospital again, reported "People Magazine". Apparently in the removal of the benign tumor in June, an artery in the brain was "nicked". They stopped the bleeding but an aneurysm formed days later. Scott came through the surgery well, reported the article. [5]

Retrieved from "https://figureskating.fandom.com/wiki/Scott_Hamilton?oldid=11317"
Community content is available under CC-BY-SA unless otherwise noted.