Arakawa retired from competitive skating following her Olympic win. Following her retirement, she began skating professionally in ice shows and exhibitions. She also works as a skating sportscaster for Japanese television.

Arakawa at a gold medal congratulatory parade in Sendai City 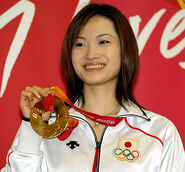 Arakawa skating in Simmsbury, CT as part of Expressions on Ice III on October 9, 2004
Add a photo to this gallery

On becoming a TV commentator:

Arakawa was born in Shinagawa, Tokyo, Japan, and grew up in Sendai, Miyagi, the largest city in the Tohoku region. She is the only child of Koichi and Sachi Arakawa. She was named Shizuka after Shizuka Gozen.

She enrolled at Waseda University in March 2000, and graduated with a Bachelor's degree in social sciences in 2004, while still competing as a skater. She won the 2004 World Figure Skating Championships days after completing her graduation examinations at Waseda University.

She lived and trained for a time at the International Skating Center of Connecticut in Simsbury, Connecticut in the United States after the closure of the Konami Sports Ice Rink in Sendai, where she began her career.

Arakawa cites gourmet cooking as one of her hobbies. She collects beanie babies, has a pet shih tzu (named Charo) and hamster (named Juntoki).

When Arakawa was 5 years old, she became interested in skating and entered the Chibikko Skate School.

She started ballet lessons at 7. While still 7, Arakawa had begun training with former Olympian Hiroshi Nagakubo, a pair skater who competed in the 1972 Winter Olympics in Sapporo, Japan. She was landing triple-jump salchows at age 8.

In 1994, she began participating in Japanese national skating competitions. She was named the 1994, 1995, 1996 All Japan Junior Figure athlete. Arakawa progressed through the Japanese ranks quickly and was the first skater in Japan to win three consecutive junior national titles.

Arakawa was the senior national Japanese champion in both 1998 and 1999.

Arakawa made her Olympic debut when she represented Japan in the in at age 16. The and of Japan attended the ladies' free skate event. She placed 13th at the Nagano Olympics. At this time, she was ranked number 2 in Japan.

In 2002, Arakawa finished second at Japan's national championships and as a result was not named to the Japanese 2002 Winter Olympics team.

During the 2002-2003 skating season, Arakawa won the Asian Winter Games and the Winter Universiade. She took her second consecutive silver medal at the Four Continents Championships. She finished fourth at the ISU Grand Prix Final and took the bronze at the NHK Trophy. Arakawa placed fifth at the Cup of Russia, and later finished third at the Japanese Nationals, marking her fifth medal from this meet, with two golds and two silvers from previous seasons.

In 2004, she won the 2004 World Championships in Dortmund, Germany, after landing seven clean triple jumps. She is the third Japanese woman to win this title after Midori Ito who won in 1989 and Yuka Sato in 1994.

Arakawa had planned to retire after the 2004 World Championships, but her victory there convinced her to change her plans. She struggled with a foot injury, homesickness and motivation, and was beginning to trail behind younger Japanese competitors like Miki Ando and Mao Asada.

Her 9th place finish at the 2005 World Championships was the motivation she needed to stay in the sport and regain top form. She felt she could not quit on such a down note. In November 2005, Arakawa called figure skater Nikolai Morozov and asked if he would consider coaching her. He agreed.

At the 2006 Winter Olympics in Turin, Italy, Arakawa was in third place behind Sasha Cohen (trailing Cohen by only a point) and Irina Slutskaya after the short program. Arakawa skated to Fantasie Impromptu by Chopin for her short program. Although Cohen and Slutskaya were the heavy favorites for the gold medal, both fell during the long program.

Arakawa skated to Vanessa Mae's Violin Fantasy based on Turandot by Puccini for her long program. One of the highlights of the program was when she performed an Ina Bauer and then did a three jump combination. "Ina Bauer" became a household word in Japan as a result. Arakawa skated a clean free-skate program, with no falls. Although she had planned a triple-triple combination for the free skate, she did not perform it. She changed it into a triple salchow-double toe loop combination.

After winning her Olympic title, Japanese Prime Minister Junichiro Koizumi called Arakawa in Turin, Italy to congratulate her. Koizumi said, "I cheered for you with excitement while I watched television. All the Japanese people are rejoicing. I give a perfect score to every bit of your performance."

Arakawa continues to skate in exhibition programs and is a regular skating commentator for Japanese TV. She competed in the 2006 on the World team.

In 2006, Arakawa appeared in a Japanese TV drama, Shichinin no onna bengoshi (7 female lawyers), presented by Asahi TV. She played the role of a cool public prosecutor, Yayoi Shimasaki for the 8th episode.

Arakawa is also known for her spirals. Her signature spiral is a "Y-spiral" where she releases her free leg and completes the spiral with her leg still close to her head, without the hand assist.

Her trademark move is the Ina Bauer. Arakawa's interpretation of this move putting her in a full backbend. Due to Arakawa's use of this move during her free skate at the 2006 Olympics, the term "Ina Bauer" became very popular in Japan, and Arakawa's performance of it became iconic. The term Ina Bauer is often referred to in Japan by Arakawa's name.

Retrieved from "https://figureskating.fandom.com/wiki/Shizuka_Arakawa?oldid=10976"
Community content is available under CC-BY-SA unless otherwise noted.