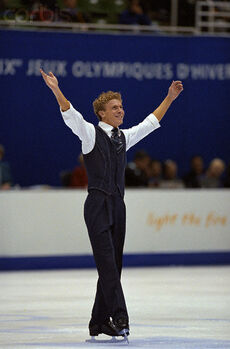 Timothy Richard Goebel (born September 10, 1980 in Evanston, Illinois) is an American retired Figure skater. Goebel was adopted through Catholic Charities by Ginny and Richard Goebel as an infant. He is the 2002 Olympic bronze medalist. He was the first person to land a quadruple salchow in competition and the first person to land three quadruple jumps in one program. He landed 76 career quadruple jumps before his retirement in 2006.

Goebel's repertoire of quadruple jumps made him one of the most competitive skaters in the world during the peak of his career. However, after 2003, Goebel began increasingly to struggle with his jumps due to injuries within the past year. At the 2006 U.S. Figure Skating Championships, in what he had previously announced would be his last competitive season, he was unable to land either a quadruple jump or triple axel cleanly, and dropped to a seventh-place finish which left him far short of qualifying for the 2006.

Goebel was heavily criticized early in his career for focusing exclusively on jumping to the detriment of choreography and presentation, but in later years he improved in those areas.

Goebel represented the Winterhurst FSC. He was coached by Audrey Weisiger in Fairfax, Virginia, after having been previously coached by Carol Heiss Jenkins, Glyn Watts, and Frank Carroll.

On April 25, 2006, Goebel announced his retirement from competitive skating. On July 27, 2006, he announced that he will finish his undergraduate education at Columbia University beginning in the fall of 2006. He is currently double majoring in mathematics and psychology in their School of General Studies. He previously attended Loyola Marymount University. He plans to continue to contribute to the sport as a technical specialist, having received certification for competitions sanctioned by the United States Figure Skating Association. He works as a technical specialist at the Aviator Figure Skating Academy in New York.

Retrieved from "https://figureskating.fandom.com/wiki/Timothy_Goebel?oldid=11581"
Community content is available under CC-BY-SA unless otherwise noted.